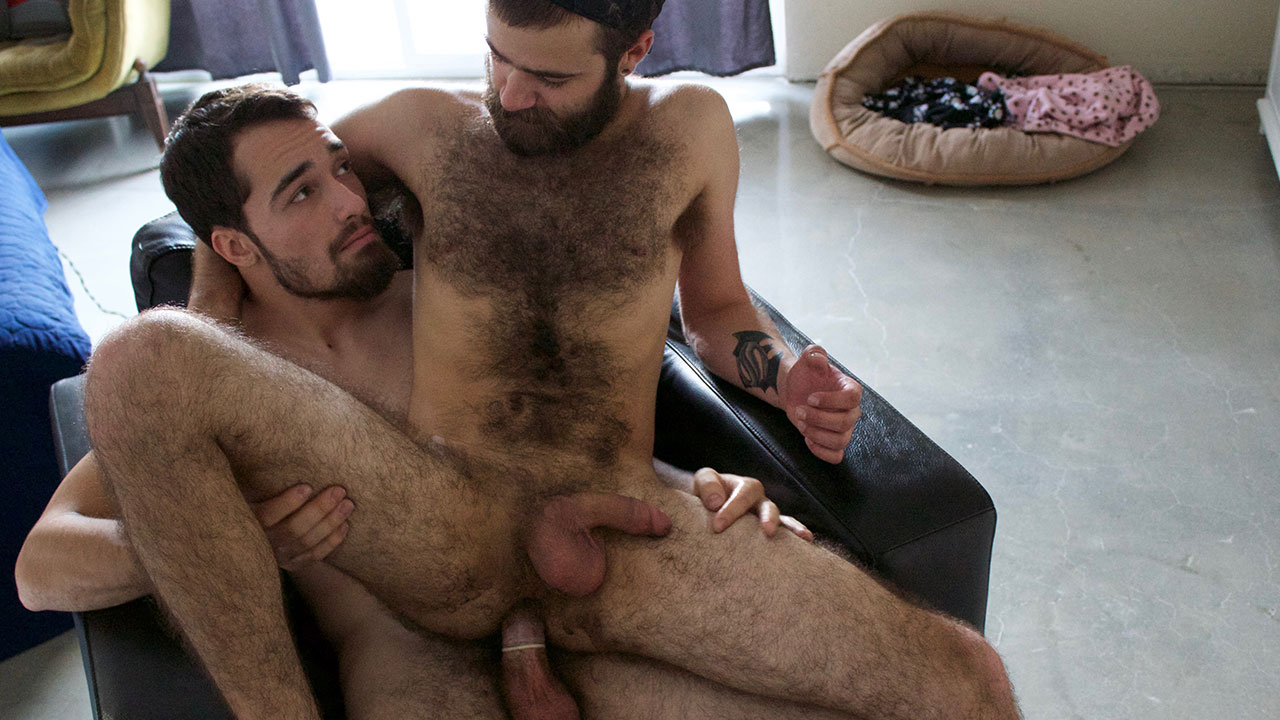 Roy Gardner is giving every GuyBone guy a run for their money for the title of hottest model on the site! This bicurious dude drips sex appeal. From his beautiful brown eyes and pouty frown to his masculine beard and body hair to his toned tummy and tight ass to that big, hard, perfect cock. 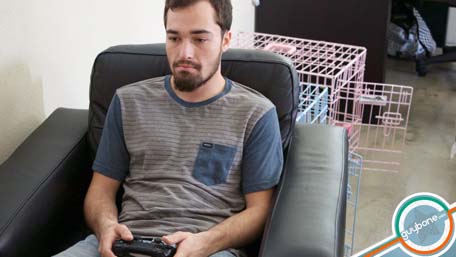 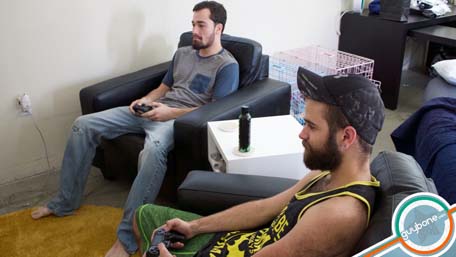 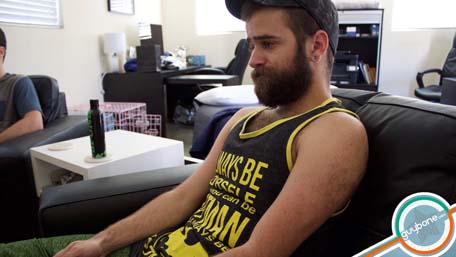 Grab your joysticks, it's time to play some games with Ryan Fargo and Roy Gardner! These two hairy hotties were busy battling it out on screen when Ryan had to readjust hisâ€¦ otherâ€¦ controller. Roy took notice out of the corner of his eye. After it happened again, Roy got up the nerve to start playing along. Suddenly both guys were grabbing at their crotches, pulling and tugging their growing cocks just beneath the fabric, teasing each other with handfuls of genitals, mounting the sexual tension in the room.

When Fargo knew his strategic move had worked, he turned off the tv and moved over to the more fun game that was about to go down. He laid a super sexy, soft kiss on Roy, their dark beards scruffing against each other. He kissed his bro gently, testing Roy's limits, tongues rubbing one another. He kneaded his knuckles on the fly of Roy's jeans, helping stiffen Roy's throbbing dick. Ryan knew what he wanted, Roy's boner in his ass, and he was about to make his bud want it just as bad.

Roy kicked back in the leather chair after removing his shirt. Those perfectly hard nipples, his masculine hairy pits, it was all so hot to behold. The look on his face and the heavy breathing said Roy wasn't completely sure about letting Ryan do this, but it felt so good to have that bearded mouth wetting his pulsating cock that he didn't dare stop him. Instead, he got even more comfortable as Ryan serviced his towering erection that rose out of his fly like a skyscraper. Fargo's ruby red tongue glistened as it slid across the perfectly straight shaft of Roy's rod.

Having pulled his own growing cock out of his shorts, Ryan stroked himself as he sucked his buddy. After getting Roy's dick nice and wet, he stood up and pulled down his shorts, offering his handsome dick to his friend, seeing if he'd take the bait and return the favor. Sure enough, Roy did. Without hesitation, he slid forward on his chair and wrapped his fist around Ryan's boner. He licked the tip with his tongue and then plopped the head in his mouth. Just one bud helping out another. He sucked not with a ton of experience, as to be expected from a bicurious boy, but rather with a natural curiosity of what his costars skin lollipop tasted like. He must have enjoyed the taste cause he kept on coming back for more. Fargo's cock sprang to life from semi chub to rock fucking hard once Roy's mouth started showing it attention. He gently encouraged Roy to try deepthroating his long, sexy shaft by placing his hand on the back of Roy's head. Roy's own hardon still stood very tall and very proud in his open jeans down below. Clearly everyone was digging the new game they'd decided to play.

Ryan got rid of his tank and exposed everyones favorite furry chest. His dark curly hair is out of this world hot. And his tight little toned body wears it so well. After some more hot sucking from Roy, Fargo stepped out of his shorts altogether and helped Roy up out of the chair. It was actually kinda sexy cute watching innocent, inexperienced Roy be coached by his bud Ryan. Ryan helped Roy out of his pants and underwear and then moved over to the other chair and bent over it. He was presenting his ass. Roy knew what Ryan wanted, and now he wanted it, too.

He rolled on a condom and lubed up with SPUNK and very slowly eased his thick dick into Fargo's hairy asshole. Fargo wiggled onto it, opening his tight hole up for Roy to enter fully. Roy took it slow, absolutely soaking in the feeling of a dude's ass, no doubt a totally different sensation from the holes this bi guy is used to fucking. Fargo reached between his legs and tickled Roy's hairy nuts as he screwed him softly. At one point, Fargo had to take a breather. Roy, the polite pothead, asked if he was alright and Fargo assured him he was. Both their rock hard dicks spoke volumes as to just how alright they both were. After that quick break, Fargo grabbed Roy's cock and shoved it back into his butt. Watching Roy's swollen red shaft slide in and out of Ryan's ass was heaven. That lengthy cock looked to be filling Ryan's entire insides. He was not complaining now, he was moaning in pleasure, fully enjoying that girthy cock.

After a nice rhythmic fuck in doggie, Roy sat on the chair and let Ryan climb aboard his raging hardon. He put his feet on Roy's athletic thighs for support, hoisting himself onto that big ole dick. He slid down onto it, feeling Roy's manhood invade his ass. And then the vocals really started. Ryan moaned like he'd never moaned before, riding up and down on his bud's boner. His own cock was still very stiff, bouncing up and down with each glide. Roy lifted Ryan's body up from under his knees, giving me a spectacular view of the penetration. The two guys rocked back and forth, Roy's hardon driving into Fargo's warm, hairy hole with purpose. Both sets of balls were taught and churning for explosion. Roy gave Ryan a reach around as he fucked his ass.

The boys traded places again for their final position, missionary with Fargo on his back in the chair, Roy standing and hammering into his hole. Fucking like this, Roy was probably able to go deeper than he had yet. Ryan could feel it, too. The full extent of his bud's erection. They both moaned as they picked up speed and headed toward orgasm. Fargo came first, pumping out a hot, white load onto his stomach fur. Roy kept fucking him to help finish the feel good moment. Then he pulled out and Ryan jerked him off. Nothing like having a bro stroke your dick to completion for you. Ryan beat his cock til Roy shot his load on top of Ryan's own nut. The two batches of boy butter commingled into one delicious looking pool in Fargo's fur. Said it before, will say it again, just one bud helping out another.